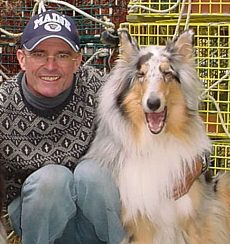 Tim Tower , owner and captain of the Bunny Clark,(The dog on the left holding his youngest collie, Finley , on January 5, 2007 - a shot taken by his daughter, Halley ) is a native of Ogunquit, Maine. He was born into the commercial fishing business on the same evening his father made his largest ever set of herring around the Isle of Shoals off the coast of Maine. Life for the next few years after revolved around his father's seiner. A career change put his father in the restaurant business with the inception of Barnacle Billy's in Perkins Cove, Ogunquit in 1961. Tim became one of two of the youngest lobstermen in Maine at the age of nine. After that, Tim's life was split between getting a school education and lobstering, tuna fishing (harpooning and handlining commercially), tub trawling (small trawl and halibut), gill netting and very little dragging. The last two years of high school were spent at Tilton School, a private school in Tilton, New Hampshire, while all four years of college were spent at Alfred University, Alfred, New York, both endeavors partially funded through commercial fishing and summer work at Barnacle Billy's. Between times, he has been a charter skipper and delivery captain, sailing vessels from different U. S. ports to Bermuda, through the Caribbean Sea, across the Atlantic, Indian Ocean and on the Pacific Ocean. He holds a biology/chemistry degree and has worked as a marine biologist for the National Marine Fisheries Service and Woods Hole Oceanographic Institution studying fish migration. Tim started taking 6 passenger fishing trips on the Mary E in 1977, built the Bunny Clark and sold the Mary E in 1983 and has been party fishing (fishing with greater than 6 passengers) with the "B.C." ever since.

At this time, Tim is scheduled to captain all but three of the marathon trips throughout the 2007 fishing season and will captain the day trip and evening trip on Tuesdays during the summer months.