To Make a Reservation on-line, Click on the Boat Icon Above 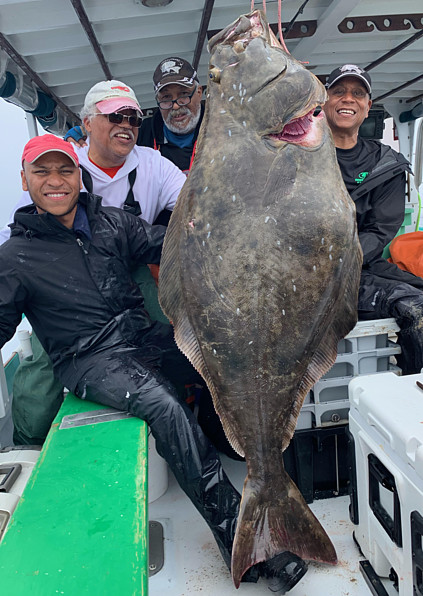 The Best Charter Boat in the World!

The New England Herring Problem (Who is taking our baitfish?)

The digital image on the right was taken during the marathon trip of June 15, 2021, the day of my son, Micah Tower's, birthday. The shot shows, from left to right, Jordan Evans (MD), Russell "Rusty" Rose (DE), Sky Rose (DE) and Joe Evans (MD) standing behind the 134.5 pound halibut that Jordan caught a half hour earlier. This is the largest halibut that has ever been landed on the Bunny Clark . We have hooked bigger ones in the past but have never landed them for one reason or another. And we could have easily lost this one. I knew that Jordan had a legal halibut on his line. And I stood next to him giving him (helpful?) hints about what to do and what not to do - I'm an awful back-seat driver. But I was not prepared for seeing a halibut that big. So I stood by with one of our regular boat gaffs when I should have had a flying gaff ready instead. The fish never made a run to bottom. And Jordan's rod was so limber that it was bent in the shape of a "U" the whole fight. You would occasionally see a head shake now and then. And I tried to prepare Jordan for the big run it was going to make when it saw the boat. But this didn't happen. Maybe it was because it was so dark; it was foggy and had just stopped raining. Maybe the fish was as unprepared as I was. For whatever reason, the first thing we saw was a big open mouth with the fish coming up directly beneath the rail of the Bunny Clark , mouth agape. I had called my deck hand, Tyler Carpenter, to be on Jordan's left with a gaff and Dave Struzik (VT), a first time angler to the Bunny Clark , also with gaff in hand, to be ready on my right. My first thought when I first saw the halibut was that this was a much bigger fish than I expected. My second thought was that the only chance I had, as the initial gaffer, was to shove the gaff down the halibut's throat and gaff it inside the jaw, which I did. Then all hell broke loose. The water went flying as the fish tried to turn and the tail came out of water. Tyler got his gaff in the fish but the fish's movement threw the gaff out. The same happened with Dave. I was not going to let go. I had braced myself with feet planted firmly under the washrail on the sealing and my back at a forty-five degree angle to the deck with the halibut's jaw pulled against a stanchion. It seemed like forever until Dave and Tyler finally got their gaffs in the fish. When they did, on my count, we dragged the fish over the rail, spent. The fish would have landed on me had Tyler not pulled it toward the stern as the fish slid over the rail. I thought the fish was 150 pounds for sure, having not seen a halibut that big since I was a kid. Halibut have become more prevalent over the last eight years to the point where it isn't unusual to see one. When I first started fishing with the Bunny Clark , it was unusual to catch one a year. Now I'm disappointed if we don't catch twenty in a season. And I do believe that the reason we are seeing so many is because of the closed fishing areas off New England and the big decrease in otter trawling. Whatever the reason, we will take it! Special fish like Jordan's are the kind of fish we like to see caught on the Bunny Clark .

For information and reservations:

Parts of all these Bunny Clark, Corp. web pages and, indeed, most of the innovations, means to ideas and tons of help came from Chamber Works, Inc. All rights reserved. If anybody in the world is interested in the internet, web pages or ideas for computer displays, kiosks and advertising, these are the companies to go with. Bank on it, baby! Best Fishes, Tim Tower.